WINNERS of the Words Move Me Contest 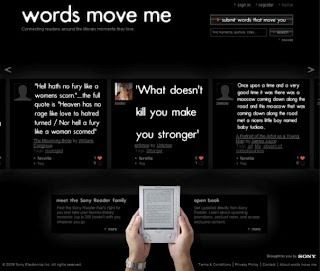 This contest was one of my favorites EVER. Reading through the (more than 360) entries was incredibly fun, which just underscores my love of great books, my appreciation for a beautiful sentence, and the joy I get from learning about other people’s favorite books and what moved them. THANK YOU for your entries to this contest! What a treat for me.

That said, of course it was difficult choosing winners because there were so many terrific entries. I was impressed by every single one of them, I’m not exaggerating. But you want to know the winners, so here they are.

Second Runner Up
Prize: evaluation of 20 pages
Submitted by Katethompson

Asking “why?” opens the door to a downward spiral of despair & anger. I never guessed I’d need Pausch’s question, “Why NOT me?” so soon after reading his book. Since our youngest son (20) died last month, I’ve relied on Pausch’s question. It helps a lot.
The Last Lecture by Randy Pausch

First Runner Up
Prize: evaluation of 20 pages
Submitted by Sparrow17

I’m not that sentimental, but I cried as I read this memoir about a woman who rescues an abused racehouse. She gains the horse’s love and trust and is able to face her own troubled past. A beautiful book about unconditional love.
Chosen by a Horse by Susan Richards

* * *
I was moved by some of the thoughts you expressed about these books. Here are a few of my favorites:

Reading this book was the first time I became aware that a writer could create a world of their own and let the reader live there for a little while. It made me want to do the same, it’s part of why I became a writer. Heartlight by T. A. Barron

I was an atheist, and while I was undergoing a personal crisis in life, I came across this beautiful book that gave me hope to live on. I found solace in God and am so grateful to the author for having written this book that changed me and my life forever. Heidi by Johanna Spyri

I also enjoyed reading the quotes from your favorite books, and found so many of them captivating. Here are some of my favorites:

My father may be the only person in the history of the world who changed himself because he despised a character in literature who struck chords of horror in himself that he could not face. He had the best second act in the history of fathering. My Losing Season by Pat Conroy

A writer’s job is to make the ordinary come alive, to awaken ourselves to the specialness of simply being. Writing Down the Bones by Natalie Goldberg

A good story is always more dazzling than a broken piece of truth. The Thirteenth Tale by Diane Setterfield

“Religion,” the Man with No Hands said quietly, staring at his feet. “Religion is what regular people get in order to stay out of Hell. People who have already been to Hell don’t want religion, they just want to know God.” Summer of Light by W. Dale Cramer

Six o’clock. Shops filling, emptying like lungs. Dazzled pigeons like rings of scattered paper climb above the minarets. This is an hour not easy to bear, when from my balcony I catch a glimpse of her walking idly in her white sandals, still half asleep. Justine by Lawrence Durrell

Listen. Your life is happening. You are happening. The Sacred Journey by Frederick Buechner

You made me want the performer in you. And I’d wish that you’d sing and strum something that would make my insides explode. A song to communicate the words that you never spoke to me. Black Boxes by Caroline Smailes

She was the book thief without the words. Trust me, though, the words were on their way, and when they arrived, Liesel would hold them in her hands like the clouds, and she would ring them out like the rain. The Book Thief by Markus Zusak

I could no longer afford to be a writer “someday.” I could no longer stuff my dreams into the future with a long list of justifications…I realized then that it was time for me to move my life purpose forward. It was time to go after my dream. Knit Together by Debbie Macomber

“Your face is wet,” he said worriedly. “I hope that’s spray. If you’ve become human enough to cry, then no magic in the world — oh, it must be spray. Come with me. It had better be spray.”
The Last Unicorn by Peter S. Beagle

Instead of vowing to honor and obey, maybe we should swear to aid and abet. That would mean that security is out of the question. The words “make” and “stay” become inappropriate. My love for you has no strings attached. I love you for free. Still Life With Woodpecker by Tom Robbins

I understood at that moment fully and suddenly why he would not carry me, and why he had not come to my defense in times past when I was battling for my place in the world. I t was not because he failed to love me, but because he loved me so well. The Heretic’s Daughter by Kathleen Kent

In addition to the winners and the quotes above, there were several other entries that made me want to read the books:

The First American: The Life and Times of Benjamin Franklin by H. W. Brands
Belong to Me by Marisa de los Santos
Bitter Is The New Black by Jen Lancaster
The Gift of Fear by Gavin De Becker
The Sum of Our Days by Isabel Allende
The Midwife’s Apprentice by Karen Cushman
The History of Love by Nicole Krauss
Sarah’s Key by Tatiana de Rosnay
The Lacuna by Barbara Kingsolver

(Plenty of other entries were terrific but they were for books I’ve already read.)

Thanks, everyone, for visiting Words Move Me and entering your favorite books.

Congratulations to the winners! Please contact me by email.
.