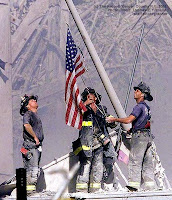 Let’s send up a prayer for all whose lives were forever tragically altered, or ended, by the terrorist attacks of that day.

And if you want, let’s share our own memories of that day. What stands out the most in your mind? Where were you when you first got the news? Who were you with while you watched it unfold?

And how did you change because of it? Did those changes last?