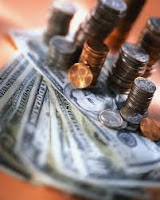 I’ve written about royalty rates several times, and I usually avoid using actual numbers because royalty rates are varied across types of publishers, types of books, and book formats. But people keep asking me, so I’ll try to explain a little more clearly here.

Royalty rates are calculated either on the retail (or cover) price of the book, or on the net price which is the price at which the publisher sells to the retailer (usually around 50% off).

The big New York publishers always pay royalties based on the cover price. Most publishers in the CBA including the largest ones pay on net. Smaller publishers vary in how they calculate royalties.

Most royalty rates increase according to the number of units sold. So a typical royalty schedule for a first time author with a mainstream publisher might be:

E-book royalties are pretty much standard right now at 25% (but some industry experts are predicting an increase to around 40%).

For first-time CBA authors, a standard royalty schedule for both trade paper and hardcover might be:

Other royalty rates are also specified in the contract, such as large print, book club, special sales, high discount sales, remainders, etc. (Braille and handicapped editions are typically licensed without payment to either author or publisher.)

Again, please note all numbers are hypothetical and vary across the industry.