Last Saturday night, Brian and I went to the Christmas party and awards ceremony of the Wescott Fire Department, where Brian is a lieutenant and volunteer firefighter. (Brian’s paid job is firefighter for the Colorado Springs Fire Department.) The ceremony was presided over by Fire Chief Jeff Edwards, a highly respected leader who serves not only his community as fire chief, but also his country as a member of the US armed forces reserves. 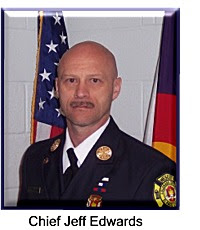 Chief Edwards was deployed in Iraq for the first half of this year, and when he returned he was very ill. He spent several weeks in and out of the hospital while doctors tried to determine what was wrong. Finally on June 11th he received his diagnosis and it couldn’t have been worse: Stage 4 pancreatic cancer. Get your affairs in order. You have 3 to 6 months.

The outlook was so severe and hopeless that local cancer centers declined to offer any kind of treatment. But Chief Edwards is not one to quit or give up. He protects and serves his country, his community, and his family that includes his wife and two school-age children, and he is determined to do that as long as possible. He was persistent in seeking treatment, and finally found a place in Denver that offered an experimental cancer treatment that would hopefully prolong his life.

Last Friday, the day before the Christmas party, the fire department threw Chief Edwards a surprise Celebration of Life party. It was the six month anniversary of his diagnosis. For the last six months, he has been continuing to take care of his family and do his job, taking time out only for his treatments. His spirits are high, his faith is strong, and he sets an amazing example on a daily basis of that quality we all could use – a positive attitude.

On Saturday night, Chief Edwards gave an inspiring speech that I’ve been pondering ever since. He said, “I have cancer. Cancer doesn’t have me.” He reminded us that our time here is limited, and he urged everyone to do the things that are important now, rather than putting them off. It’s a common message, but somehow it carries more weight when delivered by someone who’s staring death in the face. Edwards said, “Visit that place you’ve been wanting to go, take up that hobby that’s always looked interesting, read that book you’ve been wanting to read.”

That’s when I thought about you, my blog readers and everyone out there who’s writing a book and dreaming of publication. I’m so proud of you because you are chasing your dreams right now. You’re not putting it off. You’re opening up that computer and facing the blank screen and putting down the words and querying agents and fielding rejections and it might not always be fun… but it’s your dream and you’re going after it, and I want to commend you for that. Big giant kudos to all of you who are refusing to put it off until someday.

If you’re reading this blog because you’re thinking about maybe trying to write a book, I want to encourage you to make 2010 the year you dive in and give it a try. Chief Edwards is right. There’s no time like the present. As he would say, “Git ‘er done.”

Let’s all decide to do something in 2010 that we’ve always wanted to do. Whether it’s continuing to write those books, or maybe healing a family rift, or putting your photos in an album, or whatever it is… let’s decide that we won’t wait any longer. Let’s git ‘er done.

Q4U: What’s it going to be? What have you been putting off that you’d like to do while you’re still here on earth? Do you think you might want to tackle it soon?

Please pray for Chief Edwards and his family. Your prayers and warm thoughts really do matter. I know many of you will do this, so thank you in advance.